The Rappahannock Choral Society (RCS) is a 60+ voice audition-only, regional chorus. Members are comprised of residents from Spotsylvania, Stafford, King George, Orange, Caroline, Culpeper and Louisa Counties and the City of Fredericksburg. All ages are represented in the chorus—from high school students on up.

The RCS performs a wide variety of outstanding choral literature at both their Christmas, and Spring Concerts. The FREE Christmas Concert always includes a variety of seasonal music—sacred and secular, popular and classic as well as humorous. The Spring Concert (General Admission $8, Seniors $5 and students and children free) includes melodies from Broadway, spirituals, music of the great composers, folk and contemporary pieces, opera and operetta. The RCS celebrated its Tenth Anniversary at its 2019 Christmas concert. 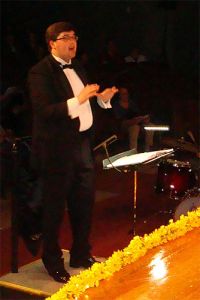 The RCS’s charismatic Conductor and Artistic Director is the accomplished Dr. Jordan Davidson. He is a graduate of the Crane School of Music at the State University of New York at Potsdam. His completed his graduate and post-graduate work at James Madison University earning his Doctor of Musical Arts in performance, pedagogy and literature in 2017. Members find him talented, energetic, and fun to work under as he guides the chorus to new heights of beautiful musical sound. Jordan incorporates all styles in concert programing to create an interesting, entertaining, and cross-cultural atmosphere. Marilla Haas, our talented accompanist has a BA in Music from University of Mary Washington and a Master’s in Education from Virginia Commonwealth University. Marilla is well known in the Fredericksburg area, she and Dr. Davidson make up the team leading the RCS. 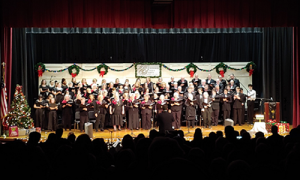 In 2013, RCS received a commendation from the Virginia House of Delegates for their spring concert commemorating the Sesquicentennial of the Civil War and the 150th anniversary of the Battle of Chancellorville. Under the award-winning artistic direction of founding conductor Linda Monner, with the incomparable accompaniment of Marilla Haas, RCS performed authentic songs that include period pieces expressing the feelings of Confederate and Union soldiers in battle and at rest, music from the home front, and songs from the Broadway musical, Shenandoah; and the Wilhousky arrangement of the “Battle Hymn of the Republic” as sung by the Mormon Tabernacle Choir. These concerts are made possible in part by a grant from the Virginia Commission for the Arts and the National Endowment for the Arts. 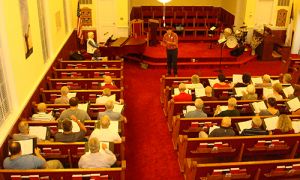 Rehearsals are held at the Zoan Baptist Church, 5888 Plank Road (Opposite the Harrison Crossing Shopping Center) every Monday evening at 7 PM. Rehearsals are open to the public so feel free to stop by to observe, listen or possibly sit in.