Like her grandfather, Fredericksburg native Pamela Bridgewater is no shrinking violet. She grew up to earn the titles of college professor and U.S. ambassador. Now she can add another: author. 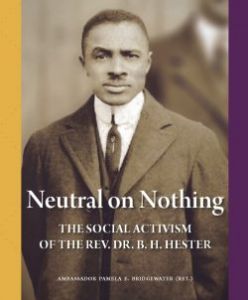 In 2019 she self-published Neutral on Nothing: The Social Activism of the Rev. Dr. B. H. Hester, her grandfather and pastor at Shiloh Baptist Church (Old Site) from 1922 to 1961. This is a short, compelling memoir filled with historic photos and documents that should be read by anyone interested in the history of Fredericksburg, especially its Black History.

In the early 20th Century, Dr. Hester faced racial injustice head-on by exercising human dignity at a time when America’s Black population was, at best, treated as second-class citizens. During his tenure as a pastor in Fredericksburg, Hester appealed to the better nature of members of the white majority to recognize their racism and gradually begin to change their attitude.

He wrote to the Richmond News Leader protesting the newspaper’s use of the epithets “darkies” and “coon” in newspaper headlines.

“As a Southerner who desires to see peace and harmony between the races; and as a member of that Christian institution which stands for the same, I strongly protest such terms of contempt as unchristian, unfair, and dangerous, and earnestly pray that the use of such may cease,” he wrote in 1925 to the newspaper’s editor, Douglas Freeman.

Freeman wrote him back immediately, saying he agreed with him and the practice would stop. Not only had Hester stopped the offensive headlines, the gesture by the Fredericksburg pastor made headlines of its own around the state.

In 1937 Hester challenged Dr. Robert B. Payne, Fredericksburg’s health officer, who asserted children’s home nurses and in-home family cooks caused the spread of syphilis in the city. Hester immediately wrote a letter to the Fredericksburg Free Lance-Star saying everyone knew whom Payne was referring to because the city’s Black residents held a majority of those jobs. To protect their jobs, Hester urged Blacks to obtain a doctor’s letter for their employers saying they were in good health. It was just one of many indignities the Black Community endured in Fredericksburg.

He also brought prominent speakers to address his downtown congregation, the most famous of which was author and civil rights activist Dr. W.E.B. Du Bois.

While he served as pastor, Hester was also an enthusiastic advocate for education for the city’s segregated Black population, a disproportionate percentage of which was illiterate or had little formal public education. At the time, Blacks in both the city and surrounding counties were segregated into an underfunded school, the Fredericksburg Normal & Industrial Institute (the precursor to Walker-Grant School before city schools were finally integrated in the 1960s). It was built on Mayfield farm, where today’s subdivision of the same name is located.

Hester not only served as an instructor, but also eventually was named principal of the school. And as if that were not enough, he instituted an adult night school at Shiloh’s sister Black church, Shiloh Baptist Church (New Site) during the pastorate of the Rev. M.L. Murchison.

Like her grandfather, author Bridgewater is neutral on nothing in this book. She doesn’t attempt to paint a pretty picture about the treatment of Black Americans 75 years ago in Fredericksburg, but she does note how her grandfather faced oppression and racism with aplomb.

“Whatever he did, he did it without fanfare,” she said. “I felt I owed it not only to my grandfather, but to everyone else, to tell that story.”

Two generations later Bridgewater faced much of the same racism as her grandfather. She attended segregated Walker-Grant High School, and during the early 1960s actively engaged in sit-ins at the local Woolworth’s, Peoples Drug, and W.T. Grant Department Store lunch counters on Caroline Street to protest their refusal to serve Blacks.

They also picketed outside the stores. The local NAACP and Black church and civic leaders, including local dentist and former NAACP state president, Dr. Phillip Y. Wyatt, organized and guided the protestors. Finally, she and her friends sat at lunch counters and were served when the established desegregated.

She held her 2019 book launch at Shiloh Baptist Church (Old Site), but it might not have ever happened had she not begun rummaging through boxes of family records and heirlooms, which had been sealed and stored during much of her 34-year career in the State Department. There she served as a diplomat in such places as South Africa, The Bahamas, and later as Ambassador to The Republic of Benin, The Republic of Ghana and to Jamaica. So it wasn’t until she finally retired that she began to forage through many well-preserved boxes of family heritage and found a cache of local history.

“The more I read, the more I became fascinated with my grandfather.”

She thought she knew all about him, having grown up with her grandparents on Amelia Street. She and her mother, Mary Bridgewater, moved in with them after her parents’ divorce. Her father, Joseph Bridgewater, was a trumpeter for many big bands, including Duke Ellington and Ray Charles, and returned to his native Houston when not on tour.

The more she read through the fading records and ancient photographs, the more she began to realize the significance of the accomplishments of the man whom she had looked up to as a child.

Bridgewater also learned that her great grandfather, John Henry Hester, was a slave and had 66 scars across his back where his owner had lashed him. “To know I am two generations from that is disturbing,” she said.

Before joining the State Department in 1980, Bridgewater received a bachelor of arts degree from Virginia State and a master’s from the University of Cincinnati. She advanced to candidacy for a doctorate degree from the American University School of International Service. And she was a professor at Bowie State, Voorhees College and Morgan State University before joining the diplomatic service. The former ambassador loves music, theater, nature and, of course, lots of travel.

For a copy of Neutral on Nothing, email bridgeworksforyou@gmail.com.