Palmer C. Hayden (1890-1973), artist of the Harlem Renaissance, is known for his realistic depictions of folklore and events in black history. He was among the first black American artists to depicted African American life, landscapes, seascapes, and African influences in his work. He sketched, painted in both oils and watercolors, and was a prolific artist of his era.

The Life of Palmer C. Hayden

Palmer C. Hayden was born Peyton Hedgeman, the son of a freed slave, in Widewater in 1890. He left Widewater as a teenager and went to Washington, DC. He joined a circus and began using his artistic talents by drawing circus posters.

In 1912, he joined the Army and served in the infantry in the Philippine Islands. It was during this time that his name was changed. There are two stories as to how it happened. One is that his commanding officer had trouble pronouncing his name and called him Hayden, instead of Hedgeman. The other story involves a recommendation from a white person that was required of all blacks in 1912. Legend has it, Hayden, or Hedgeman, asked for a letter from a supervisor for whom he had done odd jobs. The man wrote a recommendation for Palmer C. Hayden. Hedgeman, notoriously shy, didn’t ask for a correction and accepted the new name.

After leaving military service, he went to New York City and provided janitorial services in various apartment buildings throughout New York City. Coincidentally, the first tenant he worked for was Victor Perard, an artist and art instructor at the Cooper Union, previously called the Cooper Institute. Hayden was hired to clean Perard’s studio and was encouraged to continue to develop his art. Hayden eventually decided to pursue a formal education, and studied at the Cooper Union in New York City, Columbia University, and privately with Perard, practicing independent studies at Boothbay Art Colony in Maine during the summers as well. A chance encounter with Alice Dike, a woman for whom he was moving furniture, led to the discussion of art and his experience as an artist. Compelled by his cause, Dike provided him with a brochure from her church broadcasting The Harmon Foundation’s Award for Distinguished Achievement, which encouraged individuals to participate and enter their pieces. 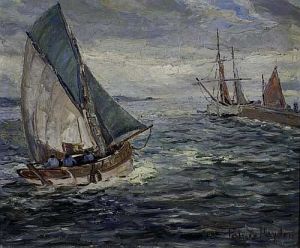 In 1926, Hayden entered his piece Schooners and won a sum of money and a gold Distinguished Achievement in Visual Arts in the Harmon Foundation’s first awards ceremony. Hayden’s success with The Harmon Foundation was followed by his premier solo show in April 1926 at the Civic Club. Hayden traveled to Paris, France and around Europe for five years where he learned more painting techniques.

In 1932, he returned to Harlem, and painted for the Works Project Administration during The Depression. In his free time, he continued with oil and watercolor paintings, but also dabbled in pen and ink drawings. His artwork is most notable for depicting African American life during the Harlem Renaissance, as well as racial conflicts/obstacles, perceptions of racism, and African folklore. While depictions of African American life are what he is most remembered for, Hayden’s career began with landscape portrayal and this continued simultaneously alongside his racially influenced art, with nature originally more prominent than the depictions of African-American life.

In 1944, Hayden started a series of a dozen works in 1944 called the John Henry series. John Henry was a railroad folk hero, known as the “steel 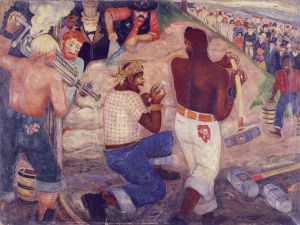 driving man,” who used only sledgehammer to tunnel through mountains and lay miles of rails. The idea was rooted in a legend he had been told in childhood by his father and he took to researching the legitimacy of the folktale, drawing inspiration to integrate into his art. Any other explanations for why Hayden felt so strongly about John Henry and the series as a whole are unclear and unspecified but are most likely linked to his proud ties to the African American community.

Hayden married Miriam Huffman in 1940. They had no children. In his elder years, Hayden continued to be active with his art. Racism remained a relevant topic in his life and art, leading him to publicly speak out against racist policies hindering the African American and Hispanic communities. In 1966, when Hayden challenged the Chairman of the New York City Commission on Human Rights, regarding the advocacy for an equal number of African Americans, Latinos, and white people on the board to prevent mistreatment fueled by prejudice and power. Hayden died on February 18, 1973, shortly after receiving a grant to depict Negro soldiers between the world wars. 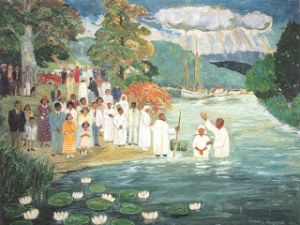 Frank White, a Stafford resident, and Janet Payne, a Fredericksburg resident, saw Hayden’s work on display at Hampton University in Norfolk, Va, and recognized the connection to Widewater. No one at Hampton knew much about it so Frank White decided to investigate further. He found a Palmer Hayden’s painting, Baptism at Widewater, at Oak Grove Baptist Church in Widewater. The Reverend Granville Butler, then pastor at Oak Grove, only knew that the painting, that, at that time, was mounted on a wall in the basement meeting room, had been donated. A historical marker at Oak Grove Baptist Church states that “Widewater native, Palmer Hayden, (Jan 15 1890 – Feb 18, 1973), a renown Harlem Renaissance Era artist, was an Oak Grove Church member.”

About the same time, Janet Payne, then Head of Fine Arts for the Stafford County school system also saw the two paintings at Hampton. She wanted to know more and confirmed that Hayden came from Widewater. Throughout her career, Payne would give frequent lectures to school groups about Hayden’s career and his artistic flair. Payne was also instrumental in arranging a Palmer Hayden exhibit in 1999 at Belmont, Gari Melcher’s home in Stafford County.

Presently, there is an exhibit, dedicated to Hayden, in the Hall of Memories at the Alvin Brandy Educational Center, 31 Stafford Ave.
Marsha Wilkins, an Arlington resident, learned about Hayden from a 1987 book The Harlem Renaissance, Art of Black America, that she bought at a yard sale. She suggested that Hayden be recognized with a historical marker. She contacted White and Payne, proposed the wording for a marker and recommended that it be placed in the new State park at Widewater, which opened in November 2018.

While Hayden or Hedgeman, wasn’t born within the boundaries of the park, it was agreed that a marker would have much more visibility in the park than on a back road. On September 19, 2019, the Virginia Department of Historic Resources approved the marker. It was installed on January 13, 2020 and will be dedicated on Saturday, February 1, 2020. The marker stands just past the Visitors Center, with Aquia Creek, the site of Baptizing Day, in the background.

The public is invited to attend the dedication of the marker and to see Widewater State Park.

Text of the marker:

Palmer Hayden (1890-1973)
Palmer Hayden, artist, was born Peyton Cole Hedgeman nearby in Widewater. He served in the U.S. Army during World War I and later studied art at Columbia University and in Boothbay Harbor, Maine. He achieved prominence as a painter during the Harlem Renaissance. A first prize in a painting competition sponsored by the Harmon Foundation in 1926 led to a five-year stay in France. Although Hayden’s works include seascapes and African themes, most notable are his portrayals of ordinary African Americans in everyday life and his depictions of the legendary John Henry. The Museum of African American Art in Los Angeles houses a large collection of his work.